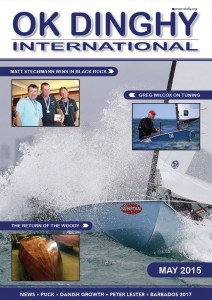 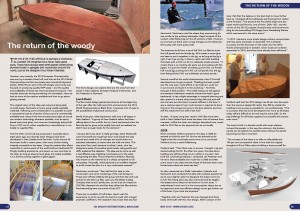 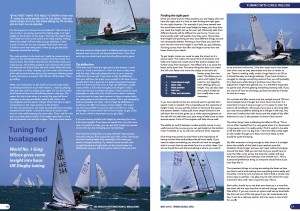 Focus on growth and development in relaunched OK Dinghy Magazine

The growth and development of the OK Dinghy class worldwide features highly in the brand new international class magazine, which was re-launched in May 2015 after a 40 year hiatus.

The continuing success of the wooden kitset boats has almost become a phenomenon with building underway in seven or eight countries across the globe. The magazine includes an extended feature on the wooden kitsets available following the unprecedented attention the class received from a press release in March after the success of two New Zealand built kitset hulls at the World Championships in Black Rock, Australia five months ago.

This issue also includes a full round up of the Worlds, with results and a top 10 gear list.

Denmark has become a model for growth in the class, doubling their numbers over the past decade through a concerted push to get more boats on the water. According to Vice-President of the Danish Association, Jesper Strandberg, who has also built many of the new boats in Denmark, he says having club owned boats that are made available to prospective sailors was the key catalyst to expanding the fleet. “It is much easier to get people hooked when they are offered a try in the boat. The Danish OK association owns three OK Dinghies. These are placed in clubs where there are already OK Dinghies. It cannot be overstated how much these boats have led to growth in Denmark.”

According the Strandberg, a good club environment, as well as an active social scene is critical to growth. “At the clubs where there are many OK Dinghies, there are boats on the water at least two times a week. Keeping boats on a road trailer at home is not the way to build a class. We also place great importance on the social aspect at the Danish events.”

Ten years ago, during the OK Worlds in 2005 in Skaelskor, the OKDIA Marketing Committee established the OK Dinghy World Ranking List. Since then it has been released 3-4 times per year and forms the backbone of the classes expanding media campaign. It has evolved over the years to reflect the worldwide spread of the class but without becoming too focussed on one region. To celebrate the 10 years the class has published the best of the best list, those who have amased the greatest ranking points.

The current number one and the all time number one Greg Wilcox reveals some of his secrets in a feature on tuning the OK. He reveals, “My starting point is always the centreboard. I like to have it set so when I am going upwind the trailing edge is at right angles to the bottom of the boat. What I am looking for on the water is how the boat tracks to windward and how much helm there is.”

He goes on to say, “Each sailor should try to set their own boat up in a way that lets them sail the way they like to sail and change modes with little effort. If you are unsure on what a well set-up boat feels like then ask any of the top guys if you can swap boats one day. It can be a real eye opener and may open a new world for you.”

The class is now looking forward to some great events in the coming years including the World Championships in Barbados in 2017 and Auckland in 2019. But first there is the 2015 and 2016 World Championships in Puck, Poland, and Quiberon, France. These events are all reviewed in the magazine. The class recently launched a new website okworlds.org, which will be the main event portal with subsites launched for each year. Already there are subsites for 2016.okworlds.org and 2017.okworlds org with ‘Expression of Interest’ forms. Unsurprisingly more than 60 sailors have already declared an interest in Barbados, two years out from the event.

In many regions the class has reinvented itself and is promoting itself with new energy to sailors from a wide background and experience. There is always someone to race against at whatever level you race at, as well as a longstanding tradition of incomparable social events.

One of the newest reconverts is 1977 World Champion Peter Lester. Two years ago he was invited to an OK Dinghy open day at Wakatere YC in Auckland. He writes, “It was a lovely Auckland 10 knots north-easterly, and we did three races. When we came ashore the guys helped get the boats on the trailers and handed us a beer. I enjoyed the experience so much I decided I would like to rejoin the OK fleet.”

“Last weekend I did my first regatta back in OKs since winning the worlds in Takapuna in 1977. I must say lining up for the first race of the Turangi International Open was a highlight for me. I shared my tent with Luke O’Connell (Colt). Colt gave me a few tips in the morning at breakfast, which helped me get my best result of a third in the last race of the regatta. Colt went on to win easily with a perfect six win score. Fantastic weekend, lots of laughs, good racing, hanging out at a beautiful location with a bunch of mates. I think that’s why I got back into the OK.”

The re-launch of the international class magazine is just one component of a wide ranging development plan that has been two years in the making, but was finally launched in January 2015. The goal is increased participation at attractive and competitive events worldwide, while positioning the OK Dinghy as the natural choice for non-Olympic single-handed sailors looking for high quality international competition.

All national secretaries have been sent copies of the magazine and should be distributing them to members in the coming weeks. If you can’t wait until then, or want to find what the OK Dinghy is all about, the e-version has also just been published here.