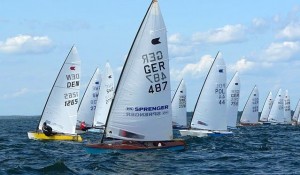 With the highest entry for more than 20 years, the OK Dinghy European Championship in Medemblik, Netherlands next week is set to be the highlight of the year for many sailors. In total there are 67 sailors from 11 countries pre-entered for the week and with many of the leading sailors missing, it looks set to be a wide open championship.

The European Championship coincides with the latest release of the OK Dinghy World Ranking List which includes the Spring Cup, Kieler Woche, Warnemunde Woche and the Nordic Championship. World Champion Karl Purdie (NZL) still leads the rankings with very few changes at the top. It is interesting to note that only four out of the top 20 are sailing in Medemblik.

In fact only one former world champion and the current European champion are attending. As the worlds has already been held in February many of the class stars are taking a break before next years worlds in Largs, Scotland, so this could be the most wide open championship for a long time.

On recent performance, the convincing winner of the Spring Cup and Kiel Week and the highest ranked sailor competing, Greg Wilcox (NZL) has to be one of the favourites. World Champion in 2002, Wilcox has been near the front of the fleet ever since and has won a score of ranking events in recent years.

Another sailor to watch will be newcomer Tim Goodbody (IRL). Having competed in the Finn in the Olympics in 2008, he jumped into the OK earlier this year after threatening to do so for many years. With the handling and set-up characteristics between the OK and the Finn being very similar, Goodbody – who is the first Irish entry at a major OK Dinghy championship for a generation – should be a front runner next week. His only form so far is a third place at Kiel Week this year.

The defending Champion is Martin von Zimmerman (GER), the winner of the Nordic Championship this year. He won the European title in Loctudy, France, four years ago. The OK Dinghy Europeans is normally only held once every four years, when the World Championship is held in the southern hemisphere, as it was this year – in Wellington, New Zealand.

While both Denmark and Poland are fielding extremely strong teams, there are also a lot of new faces this year with fleets growing fast in many countries, so there could also be some surprises in store.

Registration and measurement starts on Saturday 24 July with 10 races scheduled between Monday 26 and Friday 30 July. Medemblik is one of the OK fleet’s favourite venues and it will be a tough week’s racing but the bonus is that the winner will be European Champion for four years.